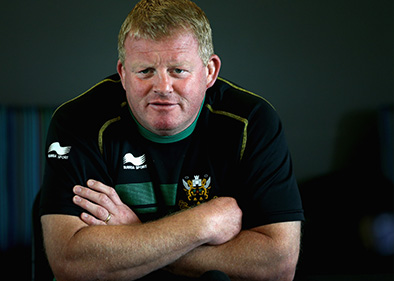 Dorian West MBE, also well known as ‘Nobby’, is a former English international rugby union play and Rugby World Cup winner. The Leicester Tigers player that made 78 appearances during his time at Welford Road, West has gone on to become a successful coach passing on vital information and experience garnered from his fantastic international and domestic career. Alongside his work as a forwards coach for the Northampton Saints, Dorian West also works extensively across the UK where he is an extremely popular and demanded rugby speaker.

Born in Wrexham, Dorian West’s family moved to England when he was young and at a time before professionalism, West was a police officer with the Leicestershire Constabulary‘s armed response unit. Making his debut at Leicester Tigers and playing for them as a flanker, it was a move to Nottingham in 1991 saw him convert to hooker and also during this time he rejected the offer of a trial for Wales. Moving back to Leicester in 1996 where he became an understudy to Richard Cockerill, West’s form improved and he was noticed by England coach Clive Woodward during matches when Cockerill was away on international duty. This resulted in him being picked on the England bench for the 1998 match against France, coming on to replace Cockerill. During his work as a rugby speaker West is able to share an insight into the game of rugby prior to professionalism as well as expressing his pride and delight at gaining international recognition.

Cockerill’s loss of form would see West gradually replace him as first-choice hooker at Leicester Tigers and West had another run of caps in the England starting line-up in 2001. He played in the 2001 Six Nations and was selected for the England tour to Canada and the USA, where he gained a further 3 caps. After the end of the tour, he was called up whilst on holiday as a replacement for the British & Irish Lions and performed so well he was on the bench for the final two tests. An opportunist, during his work as a rugby speaker Dorian West explains the circumstances surrounding his surprise selection along with informing guests of the importance of taking opportunities in life as he so brilliantly did.

During his time at Welford Road West enjoyed great domestic success and started the 2001 Heineken Cup final. The captain of England team for the world cup warm-up game against France in Marseilles in August, during the Rugby World Cup West was included in the 22 man squad for five of the games, where he started against Uruguay and came on as a replacement for the semi-final against France. He was also on the bench for the final and since his return has been awarded an MBE in the New Year’s Honours. As a rugby speaker Dorian West speaks about England’s triumphant and unforgettable campaign as well as sharing tales and anecdotes from the historic achievement.

Dorian West MBE announced his retirement from international rugby after the end of the 2003 Rugby World Cup and turned to coaching becoming forward coach for the England U21s. The current forwards coach for the Northampton Saints, Dorian West MBE is available to hire as a rugby speaker for any dinner, event or function where he is certain to be fantastic addition.

When he’s at corporate events, Dorian is known to cover the following topics: