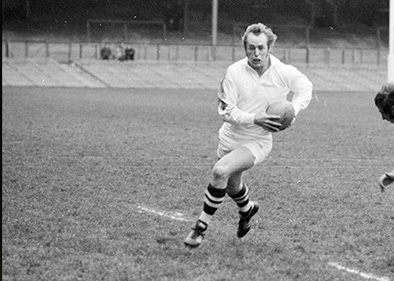 David Duckham MBE is a former professional ruby union player best known for his exploits with England and Coventry, both of which saw him earn several British and Irish Lions caps. A centre and winger, Duckham’s game was marked by pace, swerves, sidesteps and an ability to wrong-foot his opponents, although this came at a time when the English team were struggling. A figure exuding flair and charisma which shone through during his performances on the pitch, ‘Dai’ as he was affectionately known is somewhat of a benchmark for England players as he showcased the ability to play with freedom and panache adding a flamboyance to the England team. An incredibly well respected player, David Duckham MBE has become an extremely popular rugby speaker following his retirement as he tours the country appearing at events and dinners to share his experiences and knowledge with guests.

Making his debut for Coventry in 1967 it did not take long for David to establish himself and make an immediate impact. An international call up followed just two years later as he made his debut against Ireland in 1969 and quickly established himself as one of England's best centres, playing alongside John Spencer. A formidable partnership that enjoyed tremendous success, as a rugby speaker Duckham shares the reasons he felt the pair were so successful as well as explaining what it was like to represent his nation.

In the late 1960s and thereafter David Duckham was played on the wing for his country largely due to his blistering pace and in 1971 was part of the successful British and Irish Lions tour to New Zealand. Encouraged by coach Carwyn James, he found an attacking freedom that was lacking in the English game and resulted in him scoring 11 tries in just 16 games on tour. The only English back in the 1973 Barbarians side that beat the All Blacks 23–11 at Cardiff Arms Park, Duckham’s exuberance and brilliance as a player made him the idyllic player in Barbarian showcase games. In the first half of the match Duckham made a run that has become part of rugby lore, that brought gasps and cheers from a Welsh crowd more accustomed to regarding him with hostility. When he broke through the All Black defence, he appeared to confuse the commentator, Cliff Morgan, who did not know whether Duckham had sidestepped or dummied. He even sent the cameraman the wrong way; his change of direction was such that the camera went to the right and Duckham disappeared out of shot to the left. This showing of utter brilliance and genius is still reminisced upon by many including David himself during his work as a rugby speaker when he explains how that match was the origin of his well renowned nickname.

Arguably his best performances in the latter years of his career were overseas or for Coventry as he made his last appearance Internatioanl against Scotland at Murrayfield in 1976. A patron and charitable man, David is an Honorary President of the rugby charity Wooden Spoon improving the lives of disadvantaged children and young people in Britain and Ireland and speaks passionately about the topic during his work as a rugby speaker. A former England international and British and Irish Lion, David Duckham MBE is available to hire as a rugby speaker or host for any event, dinner or function.

When he’s at corporate events, David is known to cover the following topics:

To book Former England and British and Irish Lions player, David Duckham MBE, as the rugby speaker for your corporate event, function or conference, simply contact the Champions Rugby Speakers agency by filling in our online contact form. Alternatively, call a booking agent directly on 0207 1010 553.