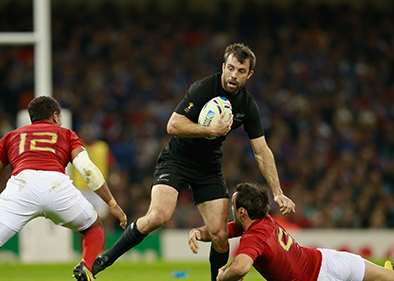 Conrad Smith is a retired New Zealand rugby union player who captained the Hurricanes in the Super Rugby. He is one of twenty players to win the World Cup twice, after winning the tournament in 2011 and 2015.

He made his international debut in 2004 aged 22 in a match against Italy. Although Smith faced a number of injuries and found himself in and out of sides both domestically and internationally, he managed to earn himself a call up to the 2011 World Cup squad. He played in the final against France as he won his first World Cup, 4 years later and Smith was winning a second World Cup, Smith played in all six 2015 World Cup games as New Zealand won the tournament for Smith’s second World Cup victory. He retired at the end of the tournament and will forever be remembered as a New Zealand legend.

Smith joined domestic side Pau in 2015 and played 52 times for them until leaving in 2018. Smith ended his career with a whole host of accolades, these included being a dual World Cup winner, the joint most-capped Hurricanes player and Super Rugby Player of the Year.

Since retiring, Smith has become a rugby speaker, his great personality and charisma makes him the perfect speaker for any type of event. He talks about his rugby career, as well as discussing topics such as maximising success, teamwork and being under the spotlight.

During his time as a rugby speaker, Smith often discusses: