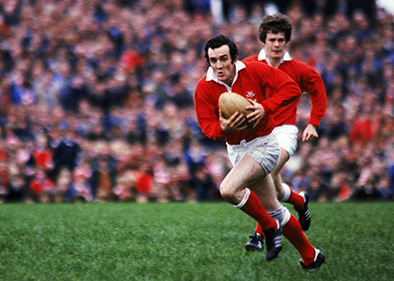 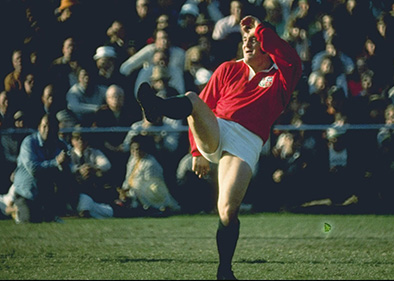 Welsh Rugby legend, Phil Bennett OBE enjoyed an extensively prolific career during his playing days, representing his country and the British and Irish Lions on a number of occasions. A popular rugby speaker and after dinner speaker, Phil Bennett provides an exceptional addition to a whole host of events and occasions. An instantly recognisable, well respected and adored personality, the Rugby Hall of Fame inductee and Welsh rugby icon works extensively as a rugby speaker appearing at events and functions across the nation.

Plying his trade with Felinfoel, Llanelli and The Barbarians, the powerful fly-half joined the British and Irish Lions on their famous South African tour of 1974 where he recorded the most points within the entire series, helping them to a 3-0 whitewash. Bennett retired from International rugby in 1978 following a fruitful and decorated career that saw him score over 165 points during 29 appearances. In recognitions of his prowess and magnificent contributions to the game, Phil Bennett OBE was inducted into the International Rugby Hall of Fame in 2005 and later, The Welsh Sports Hall of Fame in 2007. Prestigious honours for anyone to receive, Phil Bennett OBE epitomises legendary status and during his performances as a rugby speaker reminisces upon one of the finest careers in Welsh rugby history.

A popular star within his sport, Bennett’s strong and powerful personality and attitude have contributed to his successes both on the field as a rugby player, and off the field as an eloquent after dinner speaker and rugby speaker. Proving popular at a whole host of events and occasions, Phil Bennett is a sought after rugby speaker, elaborating on a truly wonderful professional rugby career. Phil is known to cover topics such as peak performance, maximising success and performing under pressure during his work as a rugby speaker, all areas that are applicable and crucial to all walks of life. An engaging rugby speaker, Phil Bennett OBE exudes charisma enabling him to effortlessly engage with guests and build a rapport to ensure both an insightful and captivating event.

Equally as prolific as a rugby player and rugby speaker, hiring Phil Bennett OBE for your event is a decision that is sure to prove popular. His eloquent speaker style, attention to detail and passion shines throughout his appearances, and he is certain to enjoy a long and illustrious career as a rugby speaker. Incredibly popular as a keynote speaker and event host, Phil’s presentation and delivery is second to none and his trait of being the consummate professional on the field has most certainly transferred to life off it. The idyllic addition to any event, the enigmatic Phil Bennett OBE is available to hire as a rugby speaker for any event, dinner or function where his presence is certain to leave guests starstruck and in awe no matter the occasion.

When he’s at corporate events, Phil is known to cover the following topics: