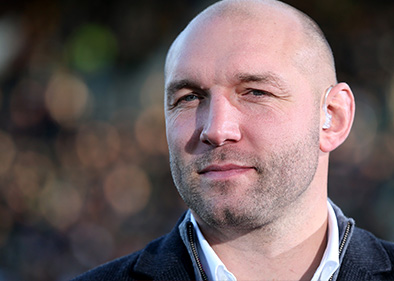 Ben Kay MBE is a former International rugby player that made over 280 appearances for Leicester Tigers over a decade in addition to 62 caps for England and representing the British and Irish Lions. The tall second row and World Cup winner was a crucial member of the Leicester Tigers team that enjoyed a period of tremendous success and superiority on the domestic stage and since his retirement Kay has worked as a commentator for BT Sport and ESPN alongside his commitments as a rugby speaker and host working at events across the nation.

Given the nickname "M'lud" as he was the son of Lord Justice of Appeal Sir John William Kay, Ben represented England in the 1996 Students World Cup in South Africa and at U18, U19 and U21 level. Graduating with a sports science degree from Loughborough University, Ben Kay joined the Tigers in 1999 and with the tutelage of Johnson and van Heerden he developed his game, becoming a highly rated middle line-out jumper, like van Heerden. As a rugby speaker Kay discusses the tremendous positive impact his fellow teammates had on his career as well as showcasing the almost immediate effect as he was a member of Tigers' Heineken Cup winning teams in 2001 and 2002 as his international career blossomed.

The Tigers Members' Player of the Year 2001/2 and nominee for the Zurich Premiership Player of the Year, the England International was a member of England’s Six Nations campaign before playing in Internationals against Australia and New Zealand. Kay established his status as a fundamental part of the England squad in the World Cup when he played every minute of every England game apart from one. His line-out skills in particular came to the fore and were in particularly highlighted during the games against South Africa when Kay amazingly learned to count to ten in Afrikaans to crack the Springboks' line-out codes. A stroke of genius that proved to be critical to the outcome of the games, Kay shares the story behind his mastermind as well as reminiscing on a truly unforgettable and historic campaign the captured the hearts and imagination of the nation. Despite the spectacular outcome, Ben Kay also shares the story of what could have been the worst day of his life as he infamously knocked on a ball in the final preventing a certain try and England victory. A hilarious account during his work as a rugby speaker, Kay most certainly sees the funny side now we all know the unforgettable and celebrated outcome.

A member of the historic 2005 British and Irish Lions Tour to New Zealand, Kay discusses this series during his performances as a rugby speaker providing a unique and incredible insight into what is arguably the most fiercely contested match up in rugby. The only player to play every minute of England's 2007 Rugby World Cup campaign culminating in their narrow loss in the Final and one of only four players to have started both the 2003 and 2007 Rugby World Cup Finals, Ben Kay is incredibly well informed about the highs and lows of rugby and in particular World Cups and he eloquently shares the intricacies of this as a rugby speaker working at events across the nation.

A Leicester Tigers legend, Ben Kay started both the Heineken Cup and Guinness Premiership finals as well as being instrumental in the Premiership double which holds such a fond place in the hearts of the city and its fans. A wonderful player and person that experienced a stellar career, Ben Kay MBE is available to hire as a rugby speaker for any event, dinner or function and is certain to be a hit with any audience as he shares outstanding tales and anecdotes from a special career.